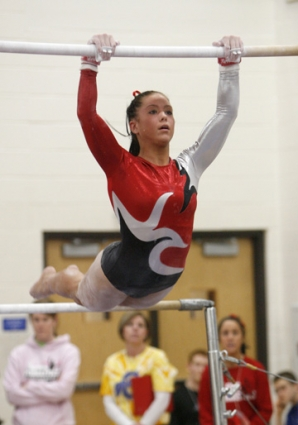 The 2014-2015 Chardon High School gymnastics team is competing their first competition on December 10. The Team practices with NDCL, Mayfield, Chagrin, West Geauga, Orange, Gilmour, Berkshire, Newbury, and Aurora. They practice at West geauga high school and most of their meets are there as well. The girls that make up the team are, Jessica Liechty, Lily Baker, Maddy Hamulak, Emily Philips, and Ally Mckelvey.  Gina Castaldo, Don schutz, Rico, and Ron coach all the teams in the gym. The chardon team has a pretty young team besides one junior the rest of them are sophomores and freshman, so after this year the team should not change, they should only add more.  The girls have the option to compete vault, bars, beam, and floor. The coaches will decide what events you compete each meet. The girls including the other schools are often talked about as “one big family” says Jessica Liechty. Jessica says “ I love the teams we practice with and we truly are one family. The coaches really help bring us together and keep up the motivation and keep down the drama.” Jessica also says “ It’s really cool how even in the off season we stay together as one. Also when we go down to states, not just the people that made it to states go down, the whole team goes down to support everybody within the schools they practice in.” Jessica was asked about the new people that join every year and she says “ we make the new people feel welcome and by the end of their first pratice they have already fit it, you also get to meet new people and it’s like an outlook to get away from school and stress and help hangout with other people too.” After talking to some of the girls from the other schools that practice with chardon they all say Coach Don is like a second dad to them and he really keeps things going and helps the girls get over mind blocks, injuries, get new skills, and even with stuff at school.  The girls are looking to have a very successful season this year and hope to not only to well individually but as a team and hope for the chardon team to win P.A.C once again after many years of winning.  Lastly come help the girls and the schools they practice with take victories tonight with their first meet against Magnificat and the other school teams they practice with.