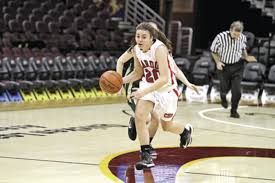 Chardon’s Lady Basketball team has been successful in the past, ending the 2013 season with a winning record of 16-7 after losing to the Madison Blue Streaks in the Division I playoffs. New Head Coach, Cullen Harris, and the brand new coaching staff look to assemble the 2014 team after tryouts on October 31 continuing through November 3.

“So far, tryouts have gone pretty successfully. The new coaching staff seems to have a very positive impact on us as players and they simply know what they are talking about. We are privileged to have them join our program.”

Junior, Jacque Hunter, looks at the upcoming 2014-15 season with excitement, stating, “We have all of the tools necessary to get wins. We have the players and a coaching staff who will work their hardest in order to achieve our goal.”

This team not only has the skill, but share a common togetherness that allows them to play with the smoothness and rhythm necessary for success this year.  To add on, the defense this year is fast and better than ever.

The Chardon Hilltoppers girls basketball team has high hopes for the upcoming season and look to go deep into the playoffs. The 2014-15 season will start with an away conference game at Geneva on Wednesday, Dec 3.