Why Conan Grey Should Be Your New Fav 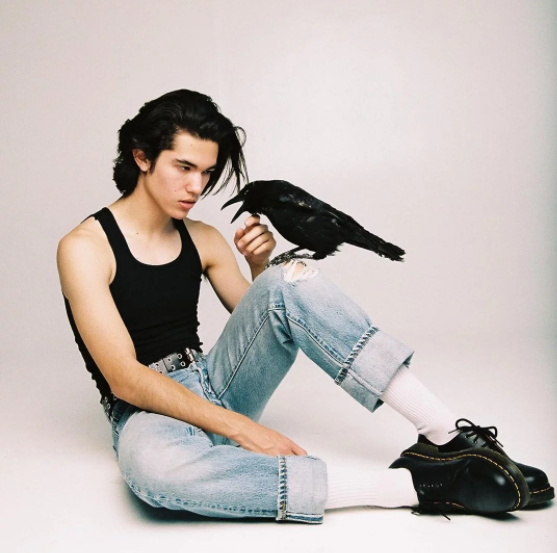 From the new and upcoming artist to a hot one hundred billboard topper. Conan Gray has made a memorable impact in the music industry. Gray is a 21-year-old artist, born in San Diego, California, and raised in Georgetown, Texas. Gray has been songwriting since he was 12 years old. Before he rose to fame, The Kid Krow singer had a childhood Youtube channel, where he posted vlogs, art and later did covers of songs. In November 2018 he released his first EP (extended play) called ¨Sunset Season,¨ under the label, Republic records. “Crush Culture” and ¨Lookalike¨ songs from his EP (extended play) soon grabbed the attention of many heartbroken teens. Later during quarantine Gray started writing his new album Kid Krow. The album focuses on experiences with love and the complications that come with it, feeling lonely, and friendships. Fans even nicknamed him ¨Pops sad prince.¨ Despite music critics largely ignoring his first album, Gray proved them wrong by accumulating 3 billion streams and having many songs on the album go platinum and gold.

Kicking off the album is “Comfort Crowd”.  In an interview with MTV, he explained how he wrote the catchy song.

“I wanted to be with people that I knew I was like sitting in bed alone, I’d spent basically like the past four months just rotting in bed alone. And I was like, ´God I wish I was with my best friend back home, You know how there are like certain friends that you have.”

He went on to explain what the song is about.

¨You can just sit in silence and just like perfectly fine. Sit for hours, do nothing, talk about nothing. You’re just perfectly happy. Yeah, so that’s kind of the type of friend that I wrote this song about. And so this is a song that I wrote for my best friend back home in Texas, named Ashley.¨

This song reminds us that we are never really alone. If Gray who has millions of followers feels alone then we will be ok.

Everyone dreams of their crush saying they like you back. But does it mean anything if they’re in the right state of mind? In “Wish you were sober” Gray tells a story about his crush calling him out of the blue confessing their love. Later Gray found out they were not sober. He goes on to explain the confusing emotions on this ballad. He wondered why they could not confess love when sober and whether they really meant it. Surprisingly many fans also related to this song and the bitter feeling that came along with the fake confession of love.

“Maniac” is the third song off his debut album. The song was certified platinum in the USA, Australia, Brazil, and Canada. The story behind the song is explained in an interview on the “Zach Sang Show.” He said that a person he barely knew was telling people that the singer was dating and obsessed with them-. You can take in the message in the unforgettable chorus of the song.

“Tell all of your friends that I’m crazy and drive you mad, that I’m such a stalker a watcher a psychopath, and tell them you hate me and dated me just for laughs so why don’t you call me and tell me you want me back, you maniac!”

The interlude “Online love” aims at complications of online relationships and their reality. Today we are living in a digital world, filled with social media and technology. Long-distance relationships are very common now. With Covid, all we had was, to text, call, and facetime with friends. In the beginning, he sings,

“You only pass through the city every once in a million seconds on a broken clock.”

This lyric means that they never really come along or visit.

In the end, you can hear a recording of Gray and his friends talking and having a good night.

Have you ever been tantalized by someone? If you have you know the feeling sucks. In Checkmate, Gray switches the tables in this 90 influenced punk rock song, instead of dwelling on this heartbreaking experience he takes control and takes the win.

“You think youŕe funny right? Calling me drunk when it’s too late at night, telling me truths you know are all lies. You think your super sly flirting with them but telling me your mine building me up but buttercup you lied, now I’m gonna ruin your life.”

This song gave fans inspiration and confidence to get through whatever they are going through. The special thing about this song and many others is that leaves mystery and allows you to interpret the lyrics and create your own meaning.

“The cut that always bleeds” is the sixth masterpiece on this album. This song is the perfect song for a rainy day and to feel your feels. It focuses on your ex or someone you loved who you can’t get over. In an interview with Zach Sang, Gray explained,

Ever been stuck between a rock and a hard place, contemplating if you should fight for what you believe in, or just run away,? If so,  Fight or Flight is your song. Fight or Flight is about finding out your partner has been cheating or has multiple people in their life, and not knowing what to do.  Gray describes the song as

During Grays’s life, they moved all over the place due to his father being in the military. Gray did not come from money. In this song ¨Affluenza¨ he sings from the view of the people who grew up in the houses we all dream of, but reminds us that with money, comes complications.

¨Mamas got a new man, and daddy’s got a new mansion to keep, he never really calls back, cause heś got too many finances to reap¨

Within the first lines of the song, he sings about a rich family that has relationship troubles. This is an interesting song for fans of Gray. He started off poor but at the end of 2020 heading into 2021, he received a net worth of 1.5 million dollars.

“Can we be friends” is the second interlude of the famous album. In an interview with Genius, a famous lyric analysis company, he clarified that he writes the interludes exclusively for the fans. “Can we be friends¨ lyrics are very deep. In the first verse, he asks this special person to be friends and to hang out every weekend with him.

“could you be my best friends lets hang out every weekend, we’re driving through the night, stare at people that we like.”

Gray goes on and continues to ask this person in his life to be friends.

In the second verse, he explains that he would always be there for the person

The song tells a story and the fans loved it.

Now for the most famous song off the album, we have “Heather”. Heather was Gray’s first song on the hot one hundred hits, and has a jaw-dropping, 310 million streams! Gray almost did not add the hit song on the album. Gray thought that no one would relate to the song and would dislike him because in one of the lyrics he wishes heather to be dead. Luckily for the fans, he made the right decision for heather to be a part of Kid Krow.

Heather was a girl in Grays high school. Gray explained her as the perfect person, everyone loved her. Gray was upset that Heather was not in love with him and instead with someone else.  This heartwrenching ballad is perfect if you have experienced heartbreak.

The intro starts with,

“I still remember the third of December me in your sweater you said it looked better on me than it did you.”

Grays’s birthday is December fifth, in an interview with ¨Genius¨ he said he got his heart obliterated two days before his birthday.

“Watch, as she stands with her holding your hand, put your arm around her shoulder now I’m getting colder, but how could I hate her she’s such an angel, but then again kinda wish she were dead.”

He goes through the motions of loving and hating the person. If you need to update your playlist definitely put this on the list.

Second to last on the album, Gray reflects on his childhood and his friends and the good times they had, wishing he was an innocent child again. The song is called ¨Little League¨

Lastly, to close the album he tells us a story. Gray usually is pretty secretive and keeps his lyrics a mystery. This is the first song we get that is more personal. “The Story.” is the name of the song. In the intro, he starts off by telling us about two friends.

“Let me tell you a story, about a boy and a girl, it’s kinda short kinda boring, but the end is a whirl. They were just 16 when the people meet and they didn’t love themselves, and now they’re gone, headstones on a lawn.”

After that, he goes on to tell us about two different friends.

“And when I was younger I knew a boy and a boy, best friends with each other, but always wished they were. Cause they loved one another but never discovered, cause they were too afraid of what they´d say, moved to different states.”

In the chorus, he explains that the world is unfair, and how some relationships don’t work because of what people would say or judge, but at the end of the chorus, he says.

¨But I think it could work for you and me.

He goes on to tell us stories he has experienced with friends and life lessons. Even tho the album has ended, Gray says,

¨Its not the end of the story¨

Gray has continued to release hit songs. He has released ¨Astronomy¨ ¨People watching¨ ¨Overdrive¨ and the most recent, ¨Telepath¨ which was released on October 29. The last time he released 4 singles, he had an upcoming album. Like Gray said, It’s not the end of the story.