Who Let The Dogs Out? Chardon high school did. 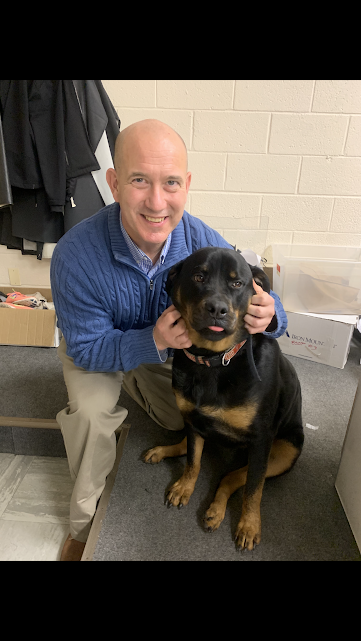 Bartley and Ellie relaxing together during a free period.

It has become quite a trend for teachers at Chardon High School to bring in their dogs to school, showing the dogs their day to day lives. There has been a total of four dogs roaming Chardon’s halls so far this year. This is not the first time Chardon has been introduced to animals coming to school. Giggles the miniature therapy horse was a big hit for kids. The name conveniently was the purpose, to spread joy, cheer kids up, and share laughs. Giggles did start to become a problem for the janitors, so her stay was short but sweet.

Dogs coming to school all started with Mr. Bartley when he brought in Ellie as a puppy two years ago. Ellie is a Rottweiler who will be two this July. Ellie has been well trained by Mr. Bartley, training is still a process. Bartley is considering getting Ellie officially certified to be a service dog, and feels that she would pass easily.

Mrs. Hetrick a guidance counselor will often bring in Marla a Labrador Retriever. Marla is seven years old and has had lots of training. Marla was raised with a family, a part of Canine Companions for Independence. CCI is a program working towards training service dogs for the disabled. Marla did not end up making it as a service dog. One of the CCI rules is that you can only have two dogs in training at a time. This leads to Mrs. Hetrick adopting Marla. “Even though she’s seven Marla loves to run and play and often acts like a puppy. She loves coming to school and all I have to do is say the word school and she jumps in the car,” said Hetrick.

Class pets are a simple way to bring a little more enjoyment to a student’s day. Walk into any high school, you will often be greeted with a feeling of stress. Getting the chance to pet and play with a friendly pooch would brighten anyone’s day.