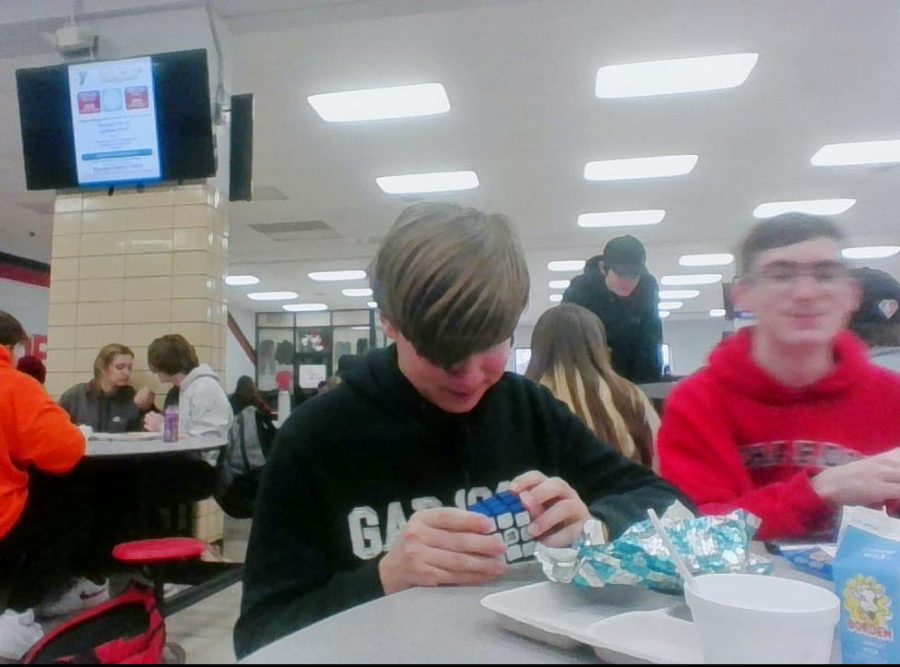 While most students like to be on their phones to distract them in class, Seth Johnston instead likes to solve Rubix Cubes.

You know those little colorful cubes from the 1980s, the time of arcades, DeLoreans, New Wave hairstyles, VCRs, and neon clothing. Rubix cubes are complex arithmetic puzzle toys that inspire creativity and keep your mind working. Johnston likes to play with them in math class.

“He always has his Rubik’s cube in class and is constantly messing with it but I can’t be mad because he is a great student,”said his math teacher, Mrs.Dicato.

Invented in 1974 by Hungarian Inventor Erno Rubik, the Rubix cube or Rubik’s cube is a complex puzzle that has the solver try to get every side back to its original color.

“Originally I thought it would only be interesting to mathematicians, scientists, or engineers. I was surprised when it was popular with the general public,” Erno Rubik wrote in an interview with Smithsonian Magazine. Erno Rubik initially called his invention the “Bűvös kocka” or “Magic cube,” and the puzzle has over 43 quintillion possible arrangements for the colored sides of the cube. It’s no wonder why it takes an average person 3 hours to solve it.

Question: What got you into Rubix cubing?
“It is really just a hobby.”

Question: At what age do you think you started Solving Rubix Cubes?
“I started solving them when I was ten years old.”

Question: Why did you start messing around with Rubix cubes?
“It was a time killer and I was bored.”

Question: What is your fastest Rubik’s cube time?
“My current Rubix cube record is 21.34 seconds, but I am not even close to the world record of 3.1 seconds.”

Question: Did you have someone who taught you how to Rubix cube or did you learn on your own?
“My mom taught me at first and then my friend, Triscuit taught me to solve it faster”

Question: Have you ever competed in a competition?
“No, I haven’t participated in Professional tournaments yet, but I do challenge my friends to see which of us can solve it faster.”

Question: Do you have any friends who also cube?
My friends and fellow students, Vinny and Triscuit also solve Rubix cubes

Question: What is your best/most expensive Rubik’s Cube?

“Probably my $30 Rubix brand, Rubix cube is the more expensive of the two I have.”